I hope someday to write something worth plagiarizing. Wait. I often do. 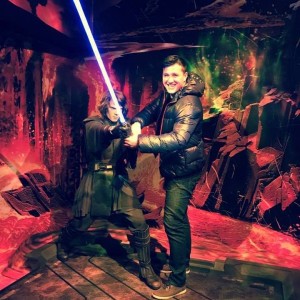 Writing is a form of art. To write is to be. Although ever present around us, most of the time we unconsciously ignore the written word, almost as if we take it for granted. The written form is mankind’s greatest historical achievement, one that has allowed our species to develop in ways we can’t even comprehend.

Not only is writing a form of art, but it is also a weightless weapon and testimony to the fact that not all weapons must be destructive in nature. Some weapons can create. Heal. That is writing. But in addition to that, writing can express emotions and feelings in ways no other form of communication can. It is unique, although most of the time unrecognized.

For me, writing is a way that allows me to travel in time. It is my personal time traveling machine. My writing takes me to places I never though I’d venture out to. For me, writing is expression in its purest form.

Through my writing, I can learn, and through my learning I can teach. Through my work I have grown, and so have the people who have followed me on this incredible journey throughout the years.

I’m always up for a new challenge so drop me a line and lets see what we can work on together.

Why Work With Me

I have been writing for nearly a decade. I wrote my first book—unpublished—when I was a kid. Back then I’d never thought I would grow up to become a writer. I guess kids dream about being astronauts, scientists, fireman, and footballers, I can hardly imagine a ten-year-old who aspires to write.

For me, the journey was unique. My parents work allowed me to travel across the world. I visited places that impacted me in more ways than one. I made great friends. I learned four languages, and this is one experience I treasure the most.

Left awestruck by the various cultures I met, the writer within broke free. I have been writing for roughly ten years now.

I’ve published countless articles that ended up being translated and republished in dozens of languages across the world. My articles, blog posts, and content, in general, has allowed me to film for the History Channel, Discovery Channel, Gaia TV, just to name a few.

I am the founder of Ancient Code, Curiosmos, and Pyramidomania.

I am working on a project called “Pyramidomania” which aims to map all known pyramids and display their location and relative information within a global map of the world.

I am a polyglot; I speak English, Spanish, German and Croatian.

On Social media, and through my various pages, over 2,.2 million people follow my work online. I have an engaging audience which grows each day.

It is clear that not in one thing alone, but in many ways equality and freedom of speech are a good thing.

“That’s been one of my mantras — focus and simplicity. Simple can be harder than complex; you have to work hard to get your thinking clean to make it simple.”

“I think if you do something and it turns out pretty good, then you should go do something else wonderful, not dwell on it for too long. Just figure out what’s next.”

I love pyramids, and I love writing about them. That's no surprise. I write for various publications, including Curiomsos and Pyramidomania, and you'll see plenty of my pyramid related articles

The history of Egypt’s Oldest Pyramid Explained in 5 Minutes

The birth of the ancient Egyptian Pyramid can be traced back to a period that took place during the Third Dynasty of ancient Egypt, around 4,700 years ago, when King

Ancient Egypt and its Deeply Rooted Worship of the Sun

Thousands of years ago, humankind looked to the sky for answers just as we do today. I've spent countless nights staring at the stars looking within the stars for answers

TELL ME MORE ABOUT YOUR PROJECT